Bishopstoke Players is a drama group based near Eastleigh in Hampshire, UK.

We were formed in 1947 to raise money for what was then the National Children’s Home (now Action for Children). Fast forward 74 years and we’ve presented over 200 dramas, comedies and pantomimes, raising thousands of pounds for charity.

In a normal year we perform three shows in Bishopstoke and regularly take part in one-act Drama Festivals across southern England. A thriving member of the local drama community, we regularly receive awards and nominations for our work.

In 2005 we were delighted and honoured to be awarded the NCH Stephenson Award “for outstanding commitment to the work of NCH and as recognition of the considerable contribution made in a voluntary capacity to the lives of some of the United Kingdom’s most vulnerable children, young people and their families.”.

Donation to Action for Children 2020

Donation to Action for Children 2020

Since 1947 we've donated the proceeds of our shows to the charity Action for Children. Usually we make a presentation at one of our autumn performances but of course this year is anything but usual. With charities like Action for Children needing funds more than ever, we were delighted to make our annual donation recently – this year for £3,000 – although, as is often the case these days, it was via Zoom rather than in person. Here we see Pete Burton, Bishopstoke Players' Chair, making this year's presentation to Lily Haig, Community Fundraiser for Action for Children, before one of our weekly members' quiz sessions. If you have a few pennies to spare please do consider sending some of them in the direction of Action for Children https://www.actionforchildren.org.uk/. Thank you. 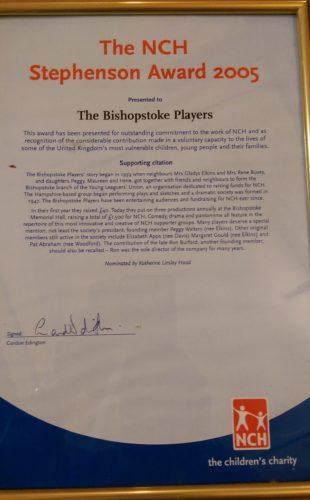