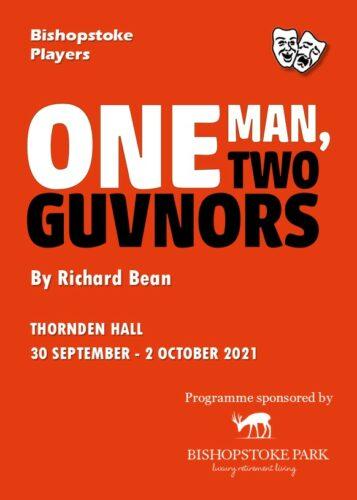 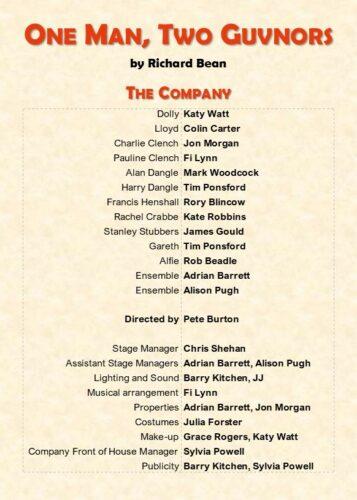 It’s not long now until we’re back on stage!  We’ve been busy rehearsing ‘One Man, Two Guvnors’ by Richard Bean throughout the lockdowns, buoyed by the knowledge that, almost 18 months after starting rehearsals, we’ll be performing one of the funniest plays of modern times in one of the best theatres locally!

‘One Man, Two Guvnors’ really is a brilliantly funny play.  If you caught the YouTube stream during the first lockdown, you’ll know just how funny it is.

And we’ll be performing it in Thornden Hall, which has a large, well-ventilated auditorium, brand-new tiered seating, and is just about to re-open after a major refurbishment.  It’s effectively a brand new, state-of-the-art theatre!

It’s shaping up to be a really great show! We have a great cast lined up with a brilliant and very funny script, in a fantastic and well-ventilated venue.

Fired from his skiffle band, Francis Henshall becomes minder to Roscoe Crabbe, a small time East End hood, now in Brighton to collect £6,000 from his fiancée’s dad. But Roscoe is really his sister Rachel posing as her own dead brother, who’s been killed by her boyfriend Stanley Stubbers.

Holed up at The Cricketers Arms, the permanently ravenous Francis spots the chance of an extra meal ticket and takes a second job with one Stanley Stubbers, who is hiding from the police and waiting to be re-united with Rachel. To prevent discovery, Francis must keep his two guvnors apart. Simple.

A classic tale of mistaken identity and a wickedly funny comedy, ‘One Man, Two Guvnors’ was a huge hit in London’s West End and on Broadway, and again when streamed on YouTube during the first lockdown.

The show opens on Thursday, 30th September, and runs until Saturday 2nd October. Curtain up at 7.30pm.

Performances take place at Thornden Hall and tickets are available online at https://thorndenhall.ticketsolve.com/shows/873625577 or phone the box office on 023 8024 6555. Thornden Hall is located on the Thornden School campus, where ample free car parking is available.

As with all our productions, proceeds are donated to Action for Children.

Not advised for young children due to mild adult content and sexual references.

Francis Henshall is the minder for Roscoe Crabbe, a small time East End gangster. Francis grasps the opportunity of an extra meal ticket to take a second job with Stanley Stubber, who just happens to be the boyfriend of Roscoe’s sister, Rachel. However, Rachel is masquerading as Roscoe, who has been killed by Stanley, in order to collect money owed to her brother by his fiancée’s father so that she and Stanley can escape to Australia. Confused yet? You will be! Adding to the mayhem, to prevent discovery and keep both jobs, Francis must also keep his two guvnors apart. As he says at one point, “What could possibly go wrong?!”

One Man, Two Guvnors is a relatively modern adaptation of Carlo Goldoni’s classic Italian comedy, The Servant of Two Masters. Instead of 18th century Italy, the play transfers to Brighton in 1963, which is a significant point to remember. It was a very different time than today, and there were a few instances when the script, completely accepted in the early 1960s, drew audibly sharp gasps and intakes of breath from the audience.

However, that doesn’t detract from the hilarious and highly charged performances on the opening night. Packed with energy, expertly timed visual gags, delivered at a cracking pace, and honouring the style of commedia dell’arte, this was a super return to live theatre for Bishopstoke Players.

Commedia dell’arte is a specific kind of improvised comedy, a precursor to pantomimes, very popular in Goldoni’s time and based around stock characters (comic servants, young lovers, pompous pedants, authoritative people), motivational driving forces and exaggerated gestures. They are all on display here, present and absolutely correct!

Director Pete Burton has overseen a sharp, slick and highly entertaining production. There are no weak links at all amongst the actors. All have their moments when they shine, and all effortlessly switch between the characters directly interacting with each other and stepping away from the action to directly address the audience.

Rory Blincow is outstanding as the comic servant. With boundless energy, he has the audience eating out of his hand as eagerly as Francis eats any food in sight. James Gould (Stanley) delivers a dynamic and at times quite extraordinary performance of visual comedy, while Kate Robbins is commanding as Roscoe/Rachel in a very different role for her. The trio make a terrific combination.

Mark Woodcock (Alan Dangle) is the epitome of the ‘thespian luvvie’, while Fi Lynn is endearingly delightful as his naïve love-interest. Tim Ponsford delivers distinctive and sterling performances as both a mobster and head waiter, while Katy Watt is full of sass and spirit as strong-willed Northerner, Dolly. Rob Beadle’s makeup may be reminiscent of Thunderbird’s Parker, but there is nothing wooden about his acrobatic performance as the octogenarian servant, Alfie – simply superb!

The last 18 months have been extremely challenging for all amateur theatre groups, although Bishopstoke Players have had the added challenge of losing their home venue during this time. Usually performing in a small village hall, I had wondered how they would transfer to a much larger performance space. I need not have had any concerns. Diction and volume were almost perfect (other than singing voices being somewhat lost under the music volume at the end) and there were some delightful touches with both lighting and sound effects. They made the most of the extra stage space and yet still succeeded in keeping the more intimate connection with the audience that they have always done so well at Bishopstoke Memorial Hall.

One Man will continue to serve Two Guvnors at Thornden Hall, Chandlers Ford on Friday 1 and Saturday 2 October (7.30pm). Get your tickets while you can to enjoy this comic gem – and be prepared for the unexpected!