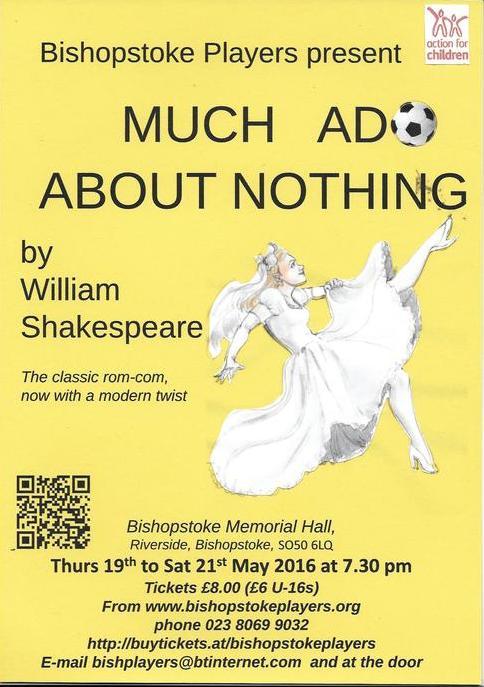 Much Ado About Nothing

I have seen William Shakespeare’s “Much Ado About Nothing” many times and in almost as many different settings, but I have never seen it set within a conquering football team manager’s villa – that was until now. The whole idea fitted in very well with Shakespeare’s dialogue without any changes required. Director, Peter Burton must have worked hard getting the football idea shoe-horned neatly into the Bard’s masterpiece, but it was a successful idea and very well cast, especially as this was the first time that Bishopstoke Players had ever performed Shakespeare in their seventy-seven year history.

As the play opened, we found Leonato, the owner of the football club, in his garden talking to his daughter, Hero, and niece Beatrice. The girls were giggling away in garden recliners making the most of Messina’s sunshine – as footballers wives and girlfriends do. All the characters were played very well, although there was lost dialogue from a couple of them due to rushing of words.

Simon Wisbey was excellent as Leonato, showing the firmness with which he oversaw his family, friends, and team. He delivered his words beautifully; the whole audience could hear and understand every word he uttered.

Benedick (James Gould) played the role as though he was a pro (footballer and actor). He acted with his eyes and expressions as well as his dialogue and moves. He will go far on the boards should he desire to do so.

Beatrice (Kate Robbins) had stage presence and audibility to equal Gould; between them they bought the whole play to life. It was a joy to watch them work together. Robins certainly knew how to do a good prat-fall when required and her scene where she was listening to Hero, Margaret and Ursula’s conversation was probably the most humorous highlight of the show. I have never seen it done that well for many a year.

Claudio, The Count, as he was known to all his football fans, (Rob Beadle) was played very well. He delivered when required, but occasionally there was a lapse before he came in with his lines, I don’t think it was nervousness, more a case of slight mis-timing.

Alex Singleton took the role of Don ‘The Prince’ Pedro to his heart. He played it as though he was ‘The Prince’, relishing every word and movement he performed.

Antonio (Drew Craduck) was played well, but I found it annoying with his nodding of the head at all times. I know that it is mentioned in the script, but I felt it was overdone to the point where it was distracting while trying to watch the other characters.

Sasha Flitney played Leonato’s daughter Hero, she played it well, but somehow she didn’t look the part, especially in the context of the football background. On several occasions she tended to rush her words and therefore made it difficult for the audience to hear or understand her lines properly.

The paparazzi – Borachio and Conrad, (Adrian Barrett and Olivia Clarke) could have been so much better if they learned how to use the camera’s properly. It stood out a mile that they were no real photographers, and that took away the realism of their roles even though they played them well.

Of the rest of the cast, Dogberry and his underling Verges (Jon Morgan and David Spencer), could have provided so much more humour than they did, they almost played it straight which is not how the Bard intended them to appear, after all, they are the fools in this play.

The lighting (Barry Kitchen) and costumes (Julia Foster and Kate Robbins) were ideal for the setting, and I loved the funky musical interludes, especially at the masked ball when Benedick, Claudio and Don Pedro appeared in drag.

All in all, it was a good production, but it could have done with a lot more trimming. Two hours – fifteen of sitting on a typical village hall chair was a tad too long.

“Sometimes bold decisions work, sometimes they don’t, so it’s good to confirm that director Peter Burton’s decision to locate this classic tale of love denied and love betrayed in the modern world of footballers’ wives and tabloid gossip was a successful one.

In the meantime, rising star Claudio (affable Rob Beadle) was duped into believing that his intended Hero (strong debut from Sasha Flitney) had betrayed him, though the ultimate villain, Kevin Bowers’ almost monosyllabic Don John, is finally brought to book.

If you enjoy amateur theatre and want to see what else is on locally, why not take a look at the Guide to Local Theatre?